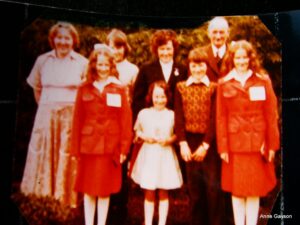 My earliest childhood memory is where it began, is sitting on the arm of my mother armchair beside my twin sister been fed. Life as a child in the country side, was it strange?. No it was not to us. We grew up with no running water, no flushing toilet, no central heating. To us as young children this was all normal, what you do not have, you do not miss. Playing cards telling fortunes, going to the fairy forts. Old folklore stories from my Grandad. Ghost stories. Living our life with the Angels. This is where the Tarot and Angels started for me. 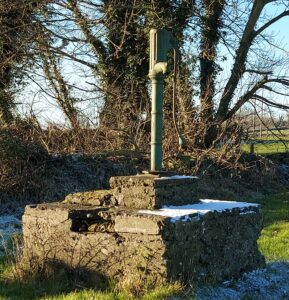 We had to go to the pump on a daily basis for fresh water. The pump was about a quarter a mile up the road from us. Placed between us and our grandparents. We used buckets to get the water. At times we would also have to bring water up to our grandparents house. Fill up again on the way back home.

By the time we got back with the water our feet were wet. The buckets were half empty, we were then told off for spilling the water. I was no bigger than the bucket. Now this water was precious it was for drinking and cooking. When it came to having a wash we had to use the rainwater we collected in the barrels from the shuts. Big pots on top of the stanely heating away. Washing up the dishes fighting about who was going to do what. With six of us in the family, none of us wanted to do the dishes so there was always some argument between us. My dad was a truck driver, he would get up do the washing up rather than listen to us all fighting. As he says anything for a peace full life.

There was no such thing of having your own bed. I shared with Trish, we were so close always up to mischief. Trish was the pet she never got into trouble. Way more outgoing than I was. We were very much seen as half people. So much so, We were fed half portions of everything. I remember my mother splitting an egg in two for us. While the rest of the kids had a full egg. They wondered then why we never put on weight. I spent my childhood curious why we only ever received half portions. It is amazing after all these years the phrase your only half a person still sits me. 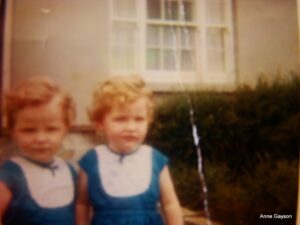 Been a twin has giving me the greatest pleasure in life. We know each other inside out. The strange ways we have conversation. Laughing and joking, no other member of our family could understand what we we were saying or laughing about. Been able to connect with some without using words is so unique, only a twin would understand. Fifty Five years later we are still connected. We also over the years have had our moments of not speaking to each other. When we speak of any fallen out we had, we both agree it was more than difficult. This is where the phrase only half a person comes in. Without your twin you do not feel complete. Today we live across the waters from each other. This is where technology is so great. Video chatting each other everyday. Our bond is now stronger than ever.

Strange as this may sound. we have my Dad to thank for staying part of each other life and the family. Our Mothers uncle in America, Uncle Phil and Aunty Eileen could not have children of their own. Because my Mother had two the same she was willing to let one of us go to Long Island with them to be brought up in America. Thank God for my dad. He put a stop to it.  Can you just imagine turning up all these years later with an American accent claiming to be part of a family,. At least been an identical twin would have confirmed it. Its strange and odd how family’s back in the sixty’s moved children around. I’m sure now their delighted they kept us together.

The Older Sister and Brother 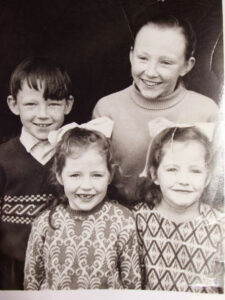 Who is the real boss in the house. My sister Margeurite, such an amazing person, A mother to us all since our mum passed away. Margeurite was the brains of the family. As a young child she was quite ill. So we reckon she was spoilt by our nanny and grandad. Always trying to get us to do our homework. Tidy up the house. Help mammy with the jobs. I’m only half a person, I can’t do all that. She was the apple of daddy eye. Margeurite went on to win a scholar ship to a convent in a private school as a full time boarder, to train as a chef. We were all so proud of her. That’s where it gets complicated. Now everyone expected us to have brains to burn.

John is the softest guy you will ever meet. He could never say no. Ask him anything, the answer would always be, yes I can do that. My strongest memory of John is Mammy and Daddy were gone to see Margeurite at the convent. We were messing around on the bikes. Doing stunts. Ok we were told not to take out the bikes. We were children, who would know we were playing outside. Well John came flying of the bike, it was a red chopper. His leg was split opened. The bike was mangled.

We got him indoors, washed as much blood as we could of his legs. Bandaged him up, got him to bed, he was in so much pain. What will we do. We were so afraid of getting in trouble. Convinced at the same time he would be fine in the morning or maybe dead, what will we do, we were hoping It would be all healed up. Later that evening we had to get auntie Nancy to come in to have a look. John was in so much pain. I can’t recall exactly what happened after that. But I do know John spent weeks in the hospital. Did we learn a lesson?.

The Younger Brother and Sister 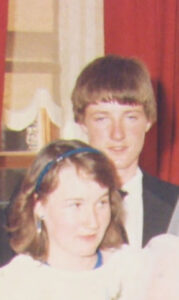 Eddie was younger than us. Loved been out in the garage with dad constructing some kind of machine. A hands on guy not afraid of hard work. Always busy doing something. As soon as you put lessons in front of him he would get upset. He knew the answers but could not put it down on paper.

Dyslexic was not heard of back then. I myself and Trish are also dyslexic. School was very hard work for us as, we were seen as been stupid. Told we were not putting effort in. Eddie holding his hand out for the master to slap him. I stood up said stop, my mother will not be happy with you, The punishment was I had to do a one hundred lines. I must not speak back to the master. One thing I can say about my mother is, you do not touch her children. She was waiting at the front gate of  Golden National School the morning after to have a chat with the master. We were never slapped again..

The youngest of us all. I vaguely remember mammy telling us we going to have a new brother or sister. I do remember her in her pram, just sleeping. Ok it’s a baby what do we do. One of my memories is we did not have play pens. So parents back then would use an old tea chest. Simply just to stand the baby or toddler in while they hanging the washing out or doing general house work. Well Yvonne was having a ball. There was black beetle in the the end of the box . She was eating it. I can still hear the crunch. She is lucky not to remember. I also rember confusion over Yvonne name, was it Johanne or Siobhan. One great thing about Yvonne is her memory when it comes to birthdays and anniversary she forgets nobody and rember everyone.